Get Started
Back to blog

A Performance Review of GitHub Actions - the cost of slow hardware

It is relatively common to accept a slow CI speed. If speed is recognized as an issue, the solution is often caching and trying to parallelize tests that do not need to run sequentially. This reduces the CI run time marginally, at most, with a cost/value proposition that is not so convincing. Most of the time, developers live with slow CI's - they accept it as a constant that can not be easily be changed in a meaningful way.

We think that developers should not have to accept slow CI's, and we believe that we have the solution to this. Before that, let's talk about the cost of slow hardware.

In this performance review, we will take a close look at the cost of slow hardware. Firstly, we will compare CI runs with different codebases, on different hardware. We will then explain the different CI runs, by delving into characteristics of the respective codebase, programming language, and the available CI hardware.

For the tests, we will go with 5 different hardware setups from these three systems:

We have chosen three codebases that we think cast a wide net. Each project runs mainly in a different language, representing a different type of codebase, with different types of characteristics. 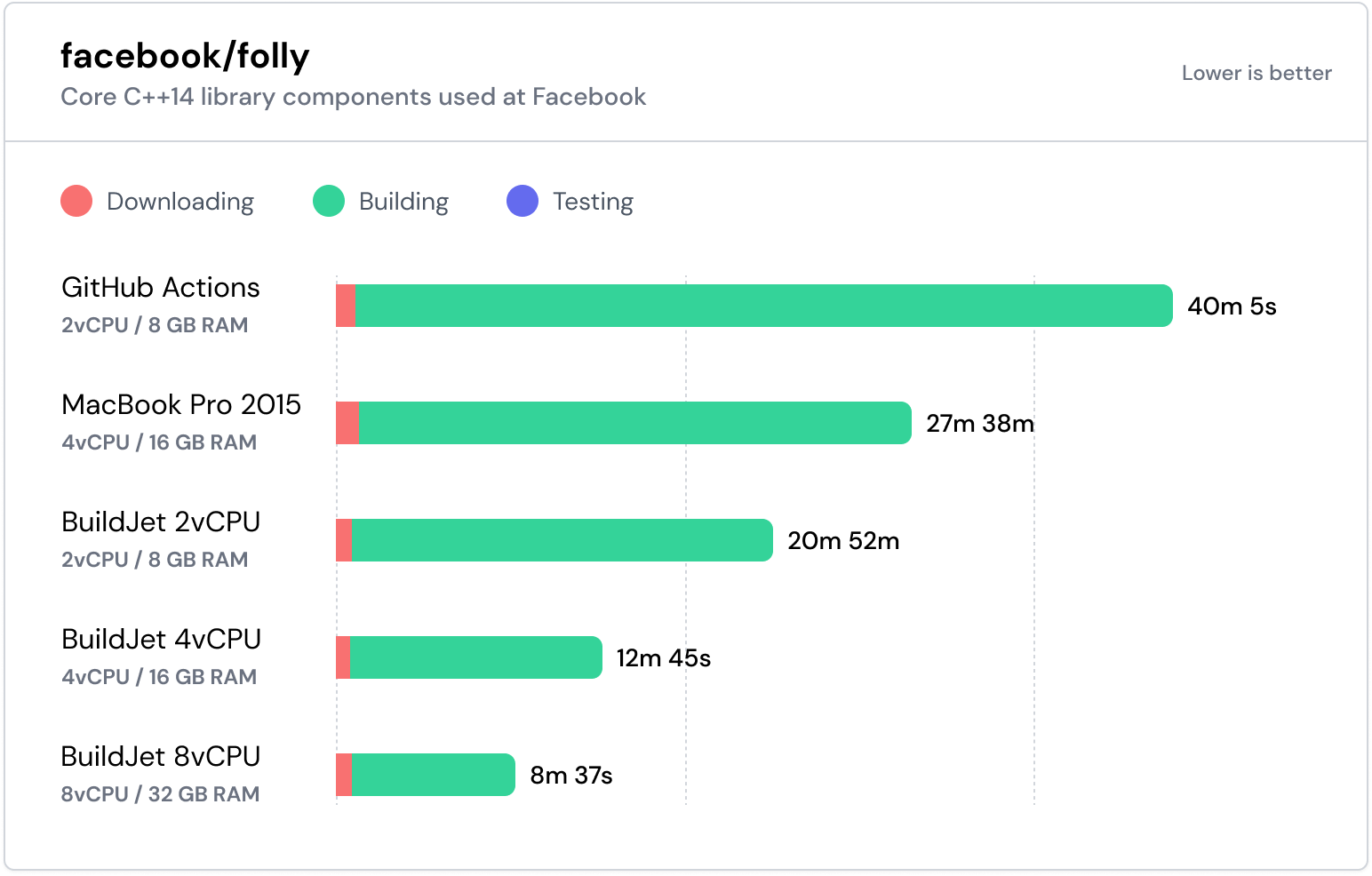 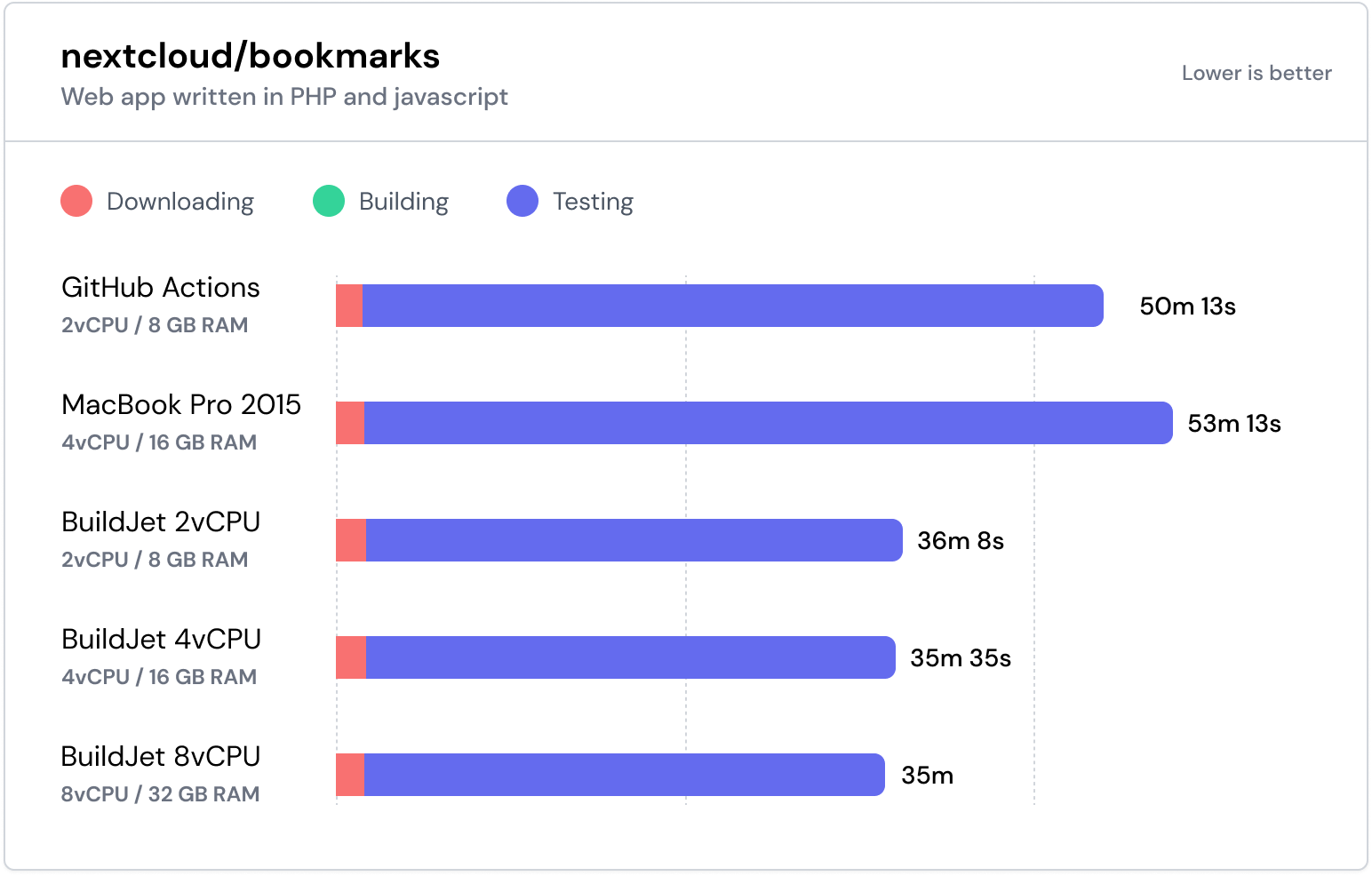 Rust build times are notoriously known to be slow, however, there are ways to minimize the slowdowns. Like many other languages, a proper amount of speedups requires CI speed is a dev team goal. 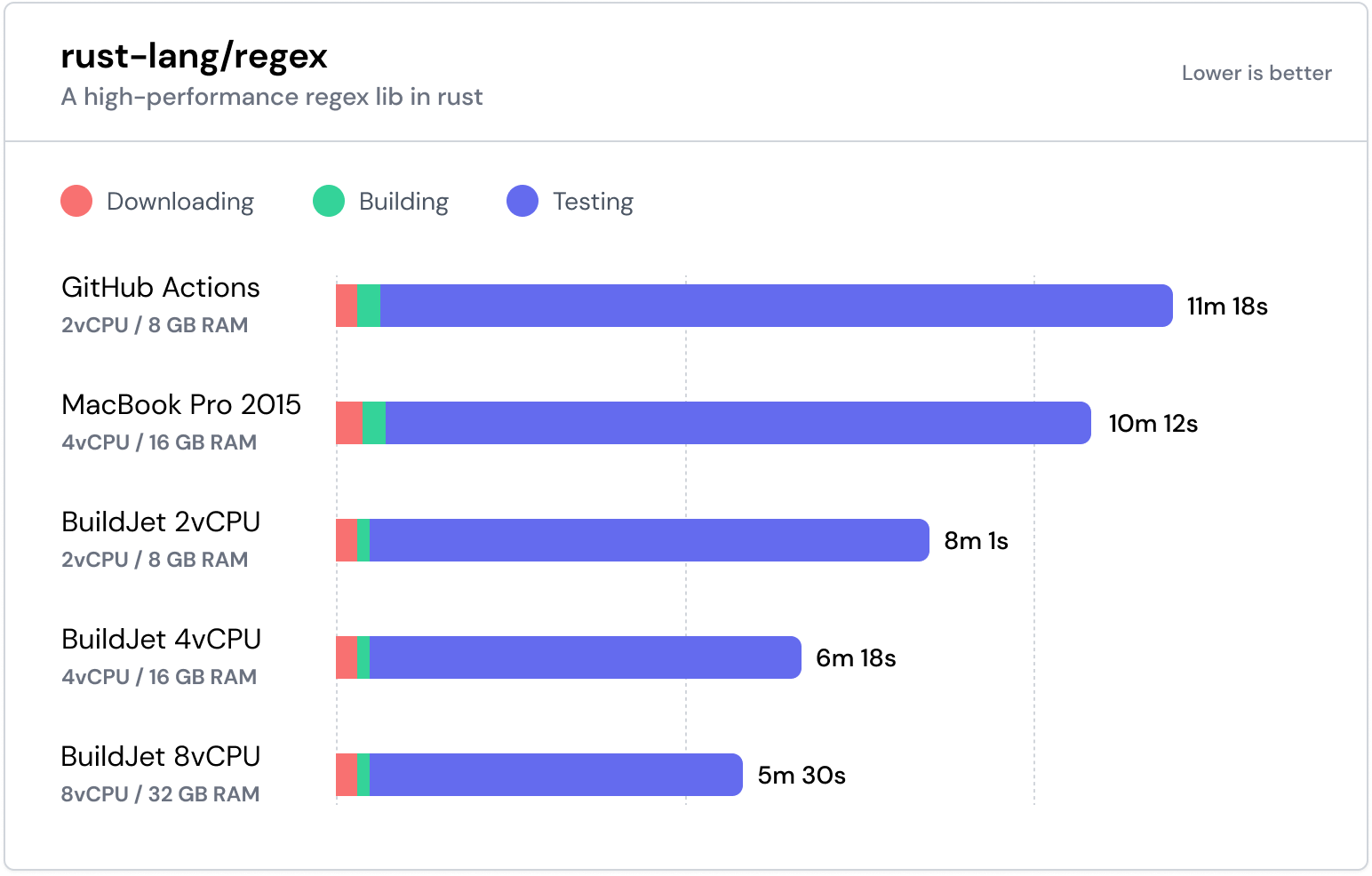 We decided to split the CI run into three parts: downloading, building, and testing. We did this mainly to highlight which part of the CI workflows can be addressed with faster hardware.

As seen in the charts above, time spent downloading does not decrease substantially with better hardware, mostly because it is network & IO-bound. The expensive parts of a CI workflow are during the build and test phase, where the workload mostly is CPU-bound and this is where good hardware counts.

Too big for speed

It is common practice for CI's to simply state the amount of vCPUs at the user's disposal. We do the same and find it generally to be a good abstraction. Cross-service comparison gets easier and the users don't need to dabble with the details. As this post is meant to explore the performance of GitHub Actions, we decided to dabble with the details. To do this we ran lscpu 50 times on the GitHub Actions hardware(source): 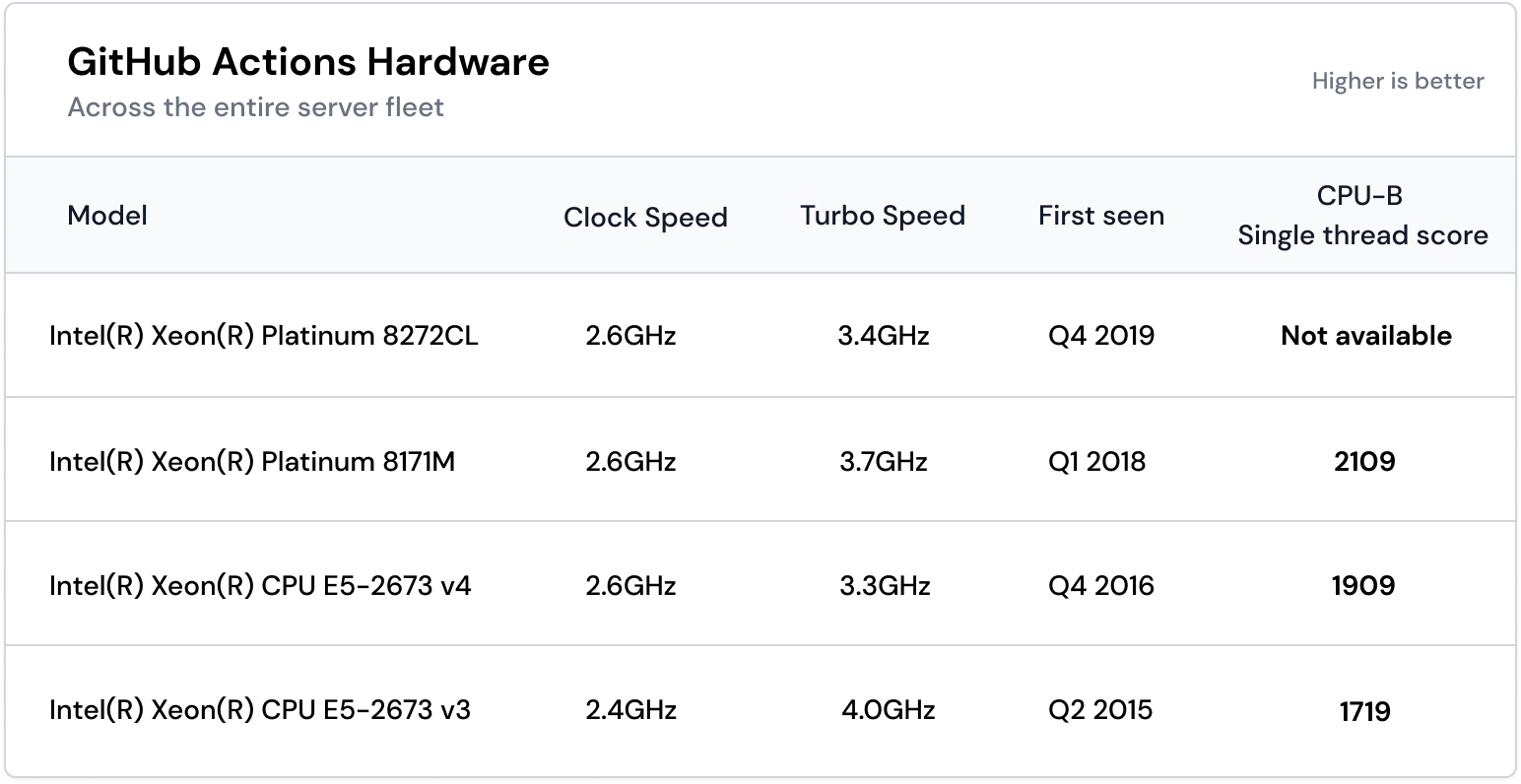 Comparing this to the BuildJet hardware: 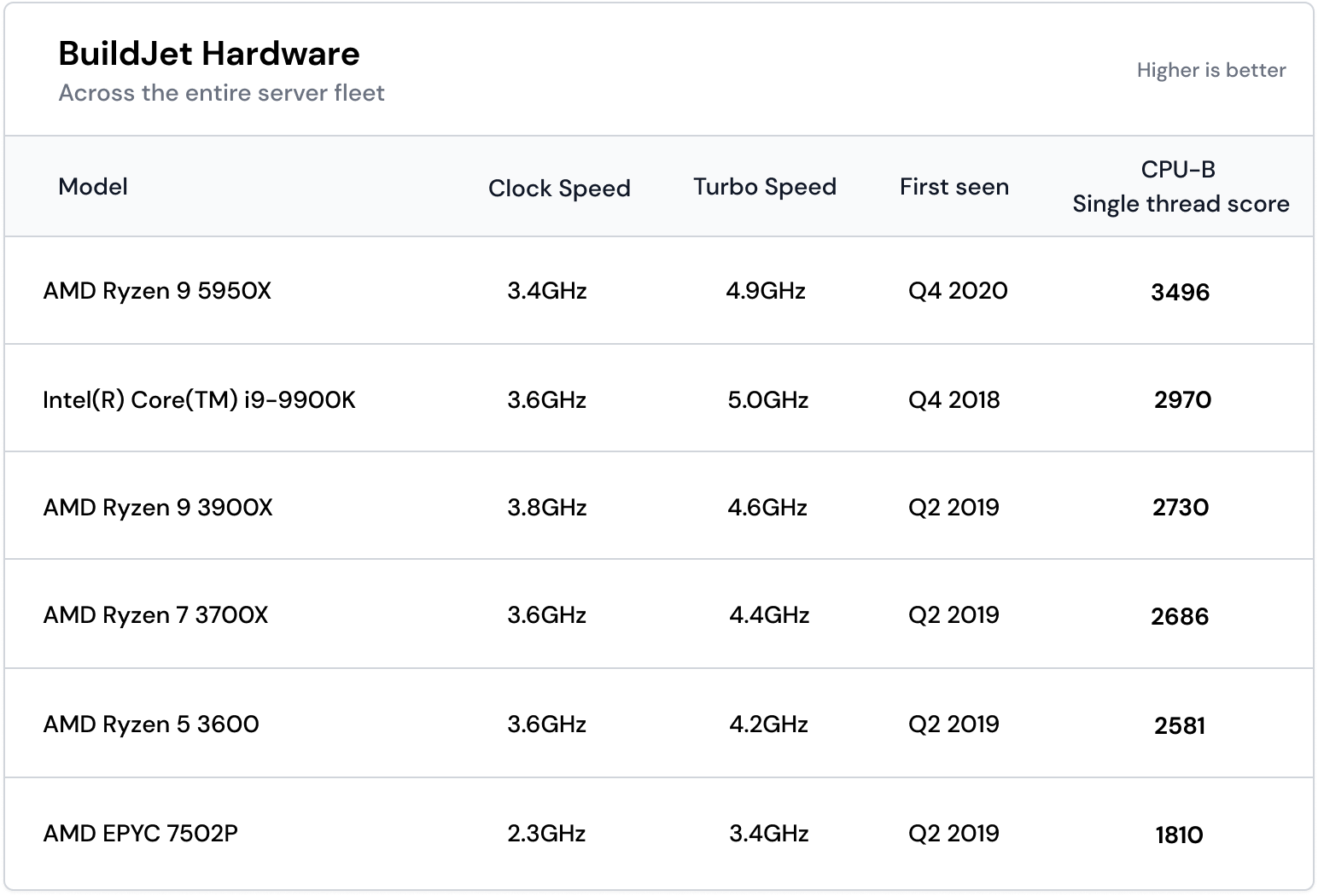 Looking at the BuildJet hardware table we can extract a few things:

Athletes in a contest of performance?

One might think we don't like GitHub Actions, but we do. We enjoy the close integration with GitHub and the free CI for public repositories. Nevertheless, we also see the value in offering newer and faster hardware to users that need it.

Our best theory in the case of GitHub Actions is that the slow hardware seems to be self-inflicted due to the close marriage to the Microsoft Azure cloud.

Painting with a larger brush, we also think the odd choice of hardware is a widespread problem in the entire CI ecosystem and not limited to GitHub Actions. We will handle the other CIs at a later stage, but for now, we will focus on GitHub Actions.